otis spofford
By beverly cleary
Otis likes to stur up a bit of excitment.When it comes to trouble hes your man,he can make a folk dance a room full of indians.He loves to make spit balls and tease ellen tebbits but one day his teasing goes too far.Hes in it deep by ellen he cut the hair she was growing for months for piggy tails.Otis is scared ellen has some big stuff planned.Not just telling his mum about it.
Follow this link if you would like to buy it     Otis Spofford 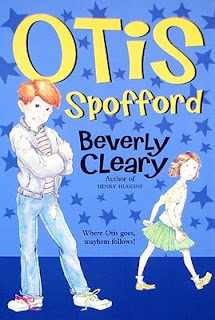 Beverly Cleary was born in McMinnville, Oregon, and lived on a farm in Yamhill, a town so small it had no library. Her mother arranged with the State Library to have books sent to Yamhill and acted as librarian in a lodge room upstairs over a bank. There, Beverly learned to love books.
A Struggling Reader
When the family moved to Portland, where Beverly attended grammar school and high school, she soon found herself in the low reading circle, an experience that has given her sympathy for the problems of struggling readers. By the third grade she had conquered reading and spent much of her childhood either with books or on her way to and from the. Before long her school librarian suggested that she write books for children when she grew up. The idea appealed to her, and she decided that someday she would write the books she longed to read, but was unable to find on the library shelves — funny stories about her neighborhood and the sort of children she knew.
Career Path
After graduation from junior college in Ontario, California, and the University of California at Berkeley, Beverlyentered the School of Librarianship at the University of Washington, Seattle. There she specialized in library work with children. She was the children's librarian in Yakima, Washington, until she married Clarence Cleary and moved to California. The Clearys are the parents of twins, now grown.
Advice to Children
Beverly's hobbies are travel and needlework. When children ask Beverly where she finds her ideas, she replies, “From my own experience and from the world around me.” Henry Huggins, written when she was in her early thirties, was her first attempt at writing. Her advice to the many children who write asking for “tips” on writing is for them to read widely while growing up, and when the time comes for them to write, they will find their own way of writing and will not need tips to guide them.